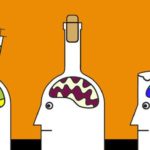 We see in ourselves or around us addictive behaviors. People addicted to different substances, always running towards the sensations and emotions that consuming certain substances brings. The impulsivity that underlies this action is the one that leads to the addiction and is the instrument that we can use to prevent this kind of behavior.
Impulsivity can be described as a set of fast and unplanned reactions at internal/external challenges, with a small quantity of awareness for the behavior. Many times, the impulsivity is associated with a problematic behavior. For example, an impulsive person can buy a lot of things, without thinking about the fact that he/she might not have enough money to pay for all those things. His/her choice can be satisfying for the moment, but on the long run it brings a lot of dangerous consequences.
The failure of resisting the temptation can be considered an important obstacle in making more rational, long term decisions, based on healthy strategies. We all can resonate with this kind of vulnerability, because we all have moments of impulsivity. But, it becomes a real problem when you are impulsive too often and the consequences of this personality trait lead to a significant decrease in the quality of life.
Impulsivity and sensations seeking make their presence felt in the teenage years, but they decrease once you get older. Studies show that the highest level is met at the age of 15 and they decrease after 20.
One of the most important traits of the risk behavior at teenagers is the emotional influence. Those activities that present a lower risk are the less stimulating ones and the ones with higher risk are the ones which bring intense feelings. So, there appears a judgement bias at the level of decision taking, therefore the teenagers seek risky situations and go for addictive behaviors in the looking for intense emotions.
When it is not a personality trait, impulsivity can appear on the background of external events. For example, financial problems can lead to impulsive and addictive behaviors because the person is focusing on the present, without seeing a bright future ahead. But, when impulsivity is a real personality trait, studies show that it can predict addictive behaviors. For example, young people with strong impulses become less likely to resist the desire of seeking sensations, therefore they become addicted to that immediate pleasure that the drugs or alcohol offer, by deleting from their cognitive system the fact that they might not have money for paying the rent, as a negative consequence.
Also, there is a vicious circle that forms in addiction, especially in the drug abuse. They activate the impulsivity zone of the brain, nurturing these behaviors, but also in the value system, changing the balance of the person in a dysfunctional direction for him/her.
So, impulsivity, as a personality trait, determines people to develop a strong vulnerability to substance abuse. We can heal this situation if we orient the person or ourselves towards long term decisions, having self-control as a purpose. This way, the positive emotions about oneself and the high self-esteem won’t hesitate to appear.